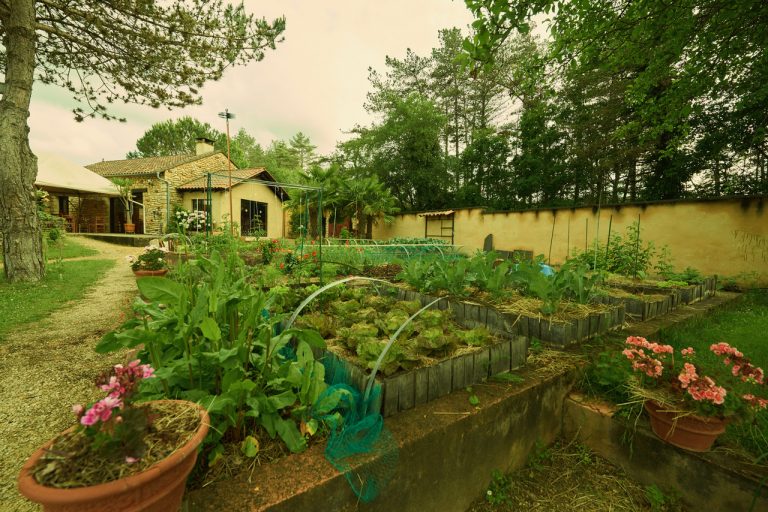 “My life unfolds itself, as it is.”

Sando Kaisen grows vegetables in a natural way on a vegetal cover, just as the forest has done for millions of years, without digging into the earth, without plowing, hoeing, weeding or composting, without any input, be it chemical or even biological, and with the minimum of watering.

It could be said that he practices “permaculture”, but he prefers to say that he has put himself at the service of nature: demanding nothing from it, while protecting it and creating the conditions for the most complete biodiversity possible.

He does not call himself a gardener, either. He simply offers to the living world the fruit that only the Boundless Heart can offer.

“I have studied a lot but, in the end, it is nature that is my greatest Master, because, unlike people, it is not artificial, does not lie, promises nothing, does not seek to become a master or to lead anything. Nature is very vulnerable because it is forced to accept everything that happens to it.” Nowadays people and monks delude themselves into thinking that they possess the true Zen, especially if, seeking power and recognition, they pursue confirmation by Japanese authorities.

Since he met Roshi Deshimaru in 1968, Sando Kaisen has continued to spread his teachings, leading an important mission in France and throughout Eastern Europe all the way to Vladivostok on the shore of the Sea of Japan.

He is not one of those who boast of having received the transmission from so-and-so, regardless how honorable they may be. He even refused it on two occasions, once at Eihei-ji and once at Soto-Shu when Kuroyanagi and Roshi Matsunaga offered it to him.

He can count on the full support and encouragement of Roshi Kosaka Kiyu, from Sengakuji in Tokyo, a transmission specialist for Eihei-ji and Soji-ji. He supported Master Deshimaru’s mission in France and, as with Master Deshimaru, he has encouraged Sando Kaisen to create a European zen and to move away from the Japanese zen, which has become administrative and political.

Sando Kaisen stayed and traveled with two friends of Roshi Kodo Sawaki on the island of Kyushu: Roshi Honda Tekifu and Shizuya Ishii, the latter being Kodo Sawaki’s great disciple at Zui Seki-Ji, near Shizuoka.

He went with them to visit and honour Kodo Sawaki’s grave in the Entai-ji temple.

Sando Kaisen often says: “I see my own face in nature and in the smallest insect. Trying to grasp the emptiness of the spirit while striving to see buddhahood in the phenomena means going astray, since objects are devoid of nature. The objects are like dreams. Seeing the buddhahood in objects is the province of the awakened ones, but then the objects are no longer objects, but the awakened ones themselves. And in the end, it is neither them nor the objects, it is the Dharmakaya, the unique body of the Buddha without birth.

I have transmitted the spirit of the Great Mokudo Taisen Deshimaru but the kitchen garden mocks it.”

“The old Siberian bear is contemplating straw beds in the peaceful snow.”